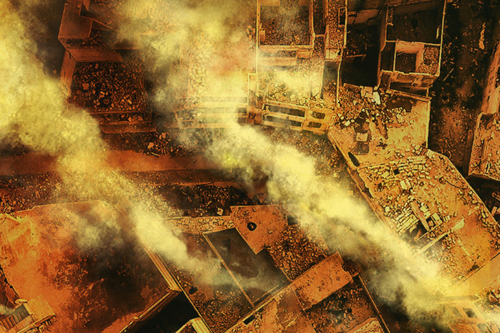 The gritty, thrilling story of local militias and uneasy allies who banded together to liberate Iraq's second-largest city of 1.3 million people from ISIS in 2017. MOSUL is a feature-length documentary built around several characters that come from the vibrantly diverse cultures and backgrounds that make up modern Iraq: Sunni Tribesman, Shiite Militias, Christian Fighters, and Kurdish Peshmerga. The story is told as a journey north along the Tigris River and into the heart of darkness as key participants fight to reclaim Mosul from the grip of the Islamic State in Iraq (ISIS, also called "Daesh"). Told through the eyes of an Iraqi journalist embedded with Iraqi forces and provided with unprecedented access to unfolding events, MOSUL reveals in stunning detail an apocalyptic battle against two unyielding enemies: violent islamic extremism - and the sectarian mistrust and hatred that will remain long after the politicians declare victory.

Filmed on location: Mosul, iraq, october 2016 - july 2017 Our field production crew, led by Iraqi journalist Ali Mula, was first embedded with Iraqi forces in the fall of 2016 during operations in Nineveh province and east Mosul. Later, the crew crossed the Tigris River into west Mosul, where die-hard ISIS fighters were holed up in homes, hospitals, schools and mosques, using civilians as human shields as they made their last stand. Under fire, and on constant lookout for ISIS suicide car bombers, our crew filmed hundreds of hours of combat photography, and dozens of interviews with Iraqi soldiers, Mosul residents, and refugees fleeing from the devastation. Ali and his crew focus on how the Iraqi Army, Sunni tribesmen, Shiite militias, Kurdish peshmerga and others are putting aside sectarian differences and uniting against the Islamic State.