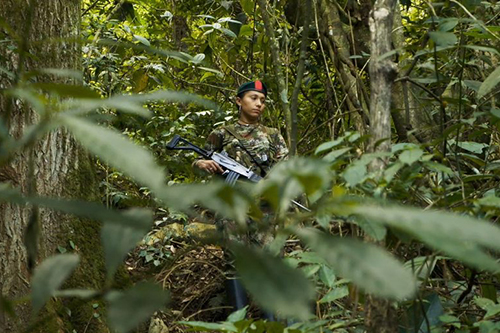 After almost four years of negotiations in Cuba, the FARC and the Colombian government signed a long-awaited peace agreement. It is precisely at this moment in time that we join a squadron of guerrilla soldiers at a camp in Cauca, South Colombia, during the transition to the laying down of weapons. As they play soccer, cook, dance, watch the news on television, attend classes and talks, we are privy to their daily routines, casual conversations among themselves as they clean their guns, their recollections of the war, what they hoped to achieve by taking up arms, their hopes and fears for the future…

Most of the time, La paz limits itself to observing the group and recording their opinions on what peace means to them, the reasons they joined the guerrilla in the first place, their views on love and the uncertain times that lie ahead. A war that produced no victor on the battle field; a peace that the protagonists of this documentary consider a victory.