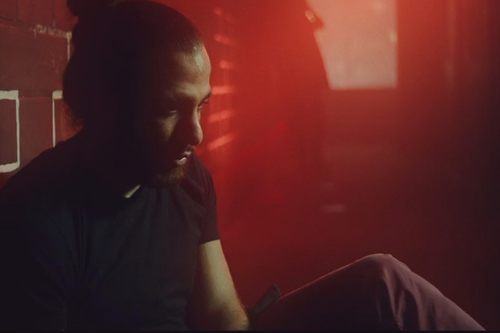 Die Polizei evakuiert wegen des Funds einer Bombe aus dem Zweiten Weltkrieg ein Berliner Viertel. Wassim will, wie angeordnet, das Haus verlassen, aber seine Mutter weigert sich partout. Die Regisseurin Dima Hamdan: “I’ve dreamt of becoming a film director ever since I was 12 or 13. I’m Palestinian and I grew up in Kuwait, and at the time there was no real prospect of me ever going to a film school because my family expected me to become a lawyer or something else.” (tonbuero.de)

Berlin. Wasim and his mother haven't been getting along for a while. Their fraught relationship is tested when the police orders them to evacuate their home for the night, to excavate a World War Two bomb.

A man applying for refugee status in Japan was told falsely that "If you work in the decontamination effort, your visa will be extended" following the accident at Tokyo Electric Power Company's Fukushima Daiichi nuclear power plant. ALARA was created based on this incident. Japan constructed an ambitious nuclear power infrastructure based on an utopian, future-oriented vision, but the nuclear power industry collapsed due to a natural disaster in 2011, forcing us to rethink science, technology and politics. Refugees have lost their rights guaranteed by the state, as well as their social and political status. Japan's national refugee policy is the most restrictive in the world, which places refugees in an ambiguous space of exclusion and inclusion. The constellation of two states of exception, "Nuclear accidents and refugees," is highlighted by a pair of oral histories, text, fictional animation and realistic moving images.

This inspirational documentary will have you in tears and every Indian glowing with pride. The film essentially uncovers a little-known story of unimaginable humanity, generosity and kindness. Towards the end of WW2 the Polish ambassadorial team in Bombay, led by the determined heroine, Kira Banasinska and supported by local Indian communities including the principalities of Kolhapur, Jamnagar and several others, dispatched a convoy of food relief and other essentials, thousands of miles to Iran, where Polish refugees from Soviet Siberian labour camps had found their way on foot and were suffering, mal-nourished. An expedition was planned with a novel idea, to bring 5,500 women and children back into India in the supplies trucks. This expedition was not so simple. It took Kira’s resilience and indefatigable energy as a Red Cross leader, to create refuge for them and welcome them to a dedicated settlement in India in three critical places, Vallivade, Panchgani and Jamnagar. Over 70 years later a number of now elderly Polish people return to a town, Vallivade, on the outskirts of Kolhapur, Maharashtra and Panchgani, where they were able to find safety and discover the joys of childhood. (source: London Indian Film Festival) “It felt like heaven to me. After all the horrors, I felt like a normal child.” “It was here that I discovered that I exist.”