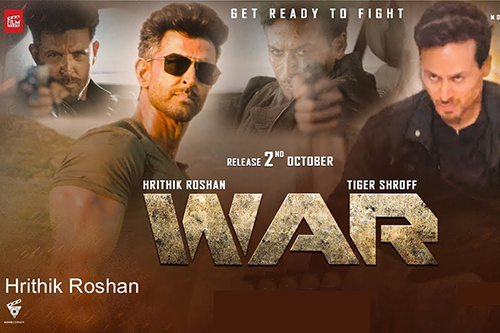 The trailer of the most awaited film of the year, War, was dropped by Yash Raj Films in a strategic move to break the internet. The high-octane action entertainer that promises to be the biggest action spectacle of all times, has two of the biggest action heroes of our generation Hrithik Roshan and Tiger Shroff pitted against each other in a massive showdown. War will see the two superstars push their bodies to pull off jaw-dropping, death-defying stunts in a bid to beat each other.

War has been shot in 7 different countries and 15 world cities. The country’s hottest action heroes have raised the bar of action by mercilessly fighting each other on the land, ocean, and air. Four action directors from across the world have been roped in to choreograph the biggest, never seen before action spectacle on screen. The action design team consists Paul Jennings (The Dark Knight, San Andreas, Jack Reacher and Game of Thrones), Franz Spilhaus (Safe House, Eye in the Sky, Death Race), Sea Young Oh (Age of Ultron, Snowpiercer) and Parvez Shaikh (Tiger Zinda Hai, Kesari, Mary Kom) – all specialists in creating unique, breath-taking, incredible action stunts. Director Siddharth Anand has left no stone unturned to make War the biggest ever action and stunt spectacle in Bollywood.