A Postcard from Pyongyang - Traveling through North Korea 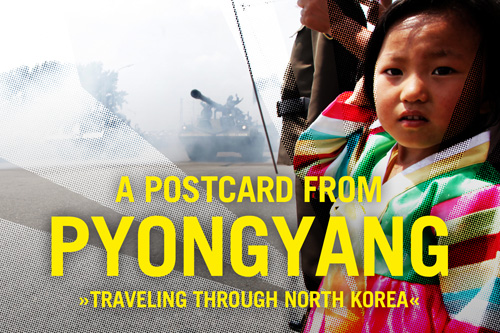 Shot during two trips to North Korea in 2013 and 2017, filmmakers Gregor Möllers and Anne Lewald provide a rare glimpse of change in the notoriously closed country. As foreign tourists, they are not allowed autonomy or spontaneity, and their itinerary is arranged for them in advance by guides who chaperone them everywhere. Despite these limitations the Berliners find a way to register their impressions of a city lacking authenticity, a country longing for reunification and a people shaped by Juche beliefs and socialist propaganda. In a society steeped in obfuscation and spectacle, where deception is necessary for perception and expression, the filmmakers themselves must play a double role, secretly recording without permission while also genuinely relating to their hosts. By blending travelogue and espionage, A POSTCARD FROM PYONGYANG captures what happens when you rely solely on what you see, not what you’re told, and reveals what Kim Jong-Un’s regime doesn’t want foreigners to see... reality.

A POSTCARD FROM PYONGYANG - TRAVELING THROUGH NORTH KOREA (Official Trailer) from MAGNETFILM on Vimeo.