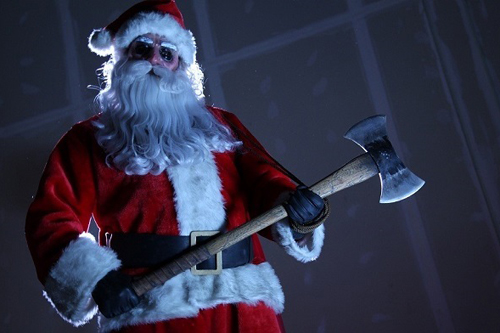 Have some time to KILL in Berlin before the holidays? Come to Babylon for 14 hours of hellish HOLIDAY HORROR!

Hellbound - Hellraiser 2
(WARNING: GRAPHIC VIOLENCE) Kirsty is brought to an institution after the death of her family, where the occult-obsessive head resurrects Julia and unleashes the Cenobites once again.

Gremlins
(Digitally Remastered, Special Edition) A boy accidentally breaks the three important rules for his new pet and unleashes a horde of evil monsters on a small town.

Silent Night
(WARNING: GRAPHIC VIOLENCE) The police force of a remote Midwestern town search for a killer Santa Claus who is picking off citizens on Christmas Eve.

Silent Night, Bloody Night
(WARNING: GRAPHIC VIOLENCE) An ax killer stalks a lawyer (Patrick O'Neal) and his girlfriend in a house that used to be an asylum.

Lady Frankenstein
(WARNING: GRAPHIC VIOLENCE, NUDITY) Hammer-Style Frankenstein Film! When Dr. Frankenstein is killed by a monster he created, his daughter and his lab assistant Marshall continue his experiments. The two fall in love and attempt to transplant Marshall's brain in to the muscular body of a retarded servant Stephen, in order to prolong the aging Marshall's life.

Santa Claus Conquers the Martians
(WARNING: SO BAD IT’S SCARY) Martians kidnap Santa Claus because there is nobody on Mars to give their children presents.

Snowbeast
Guests at a ski resort must survive a man-beast's rampage.