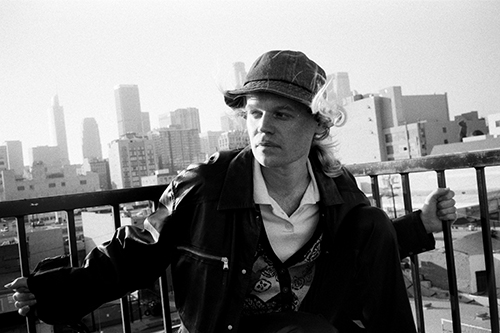 With his eccentric ability for mixing psychedelic catchy pop, trippy funk and experimental instrumentals, New Zealand native Connan Mockasin has made a notable reputation as a singular performer – and his live act has drawn both ecstatic raves and head-scratching togetherness in seemingly equal doses.

A prodigious musician and producer, the multi-instrumentalist broke out with his smooth, soft psychedelic rock inspired Forever Dolphin Love (2011) and its follow-up Caramel (2013) before going on to collaborate with the likes of James Blake, Charlotte Gainsbourg, Dev Hynes, MGMT and John Cale as well as form the duo Soft Hair with LA Priest and tour with Radiohead.

Signing to Mexican Summer, his third album Jassbusters (2018) saw Mockasin roaming across country rock, soul and musical surrealism through the eyes of a conceptual band of which the record is named after. In July 2021, Connan released It’s Just Wind, a collaborative album with his father Ade. The record indulges in a swirl of surrealist instrumentals and squelchy weirdo-funkery and was birthed after Connan received an urgent message from a clairvoyant.

In November, Connan is set to tour as well as screen a never-seen-before episode of his TV “melodrama” Bost’n ’n Dobs’n followed by an unplugged solo set.