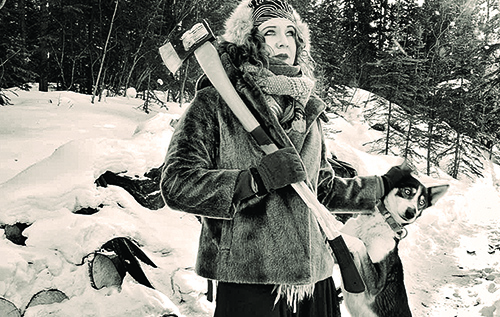 How People Got Fire [NFB, 14:00 min., English, animation, dir. Daniel Janke]
Made in cooperation with the Smith family of Kwanlin Dunn First Nation, Whitehorse, Yukon, Canada, How People Got Fire is a poetic reenactment of the ancient Tlingit legend about how people first got fire.

The Provider [8:00 min. silent film – English, dir. Maura Sauer]
A young woman lures single men to live an idyllic life in her cabin in the Yukon woods.
Things are not all as they should be.

The Man Who Always Lives in the Bush  [5:00 min. dir. Mary Jane Moses]
A portrait of the filmmakers late husband Georgie Moses, of the Vuntut G’wichin Nation of Old Crow, Yukon.

River [Northern Town Films, 7:00 min., English, Deutsche Untertitel; dir. Daniel Janke]
This poetic documentary uses archival and contemporary footage to shine a light on some of the history of the Yukon River as flowing from the future into the past.

Being Skidoo [LandMarks 2017, 10:00 min., Jeneen Frei Njootli]
Being skidoo is an experimental documentary about developing and creating regalia for skidoos based on traditional practice for dog teams in the community of Old Crow, Yukon. Frei Njootli navigates the trouble of showing this intimate practice while refusing layers of colonial gaze and consumption of their traditional Vuntut G’witchin territory.

King Covid  [CBC Gem, 10:00 min., dir. Lulu Keating]
King Covid describes how humans and viruses have interacted since the beginning of time. Now he wants credit for stopping humans before they destroy our shared habitat.

Homecoming Song
[Northern Town Films, 21:00 min., English and Tlinget, Deutsche Untertitel; dir. Daniel Janke] Made in cooperation with the Sidney family of the Carcross-Tagish First Nation, Yukon, Homecoming Song tells the story of the origins of an ancient song sung by Tlingit elder Angela Sidney when her son came home from the 2nd world war.