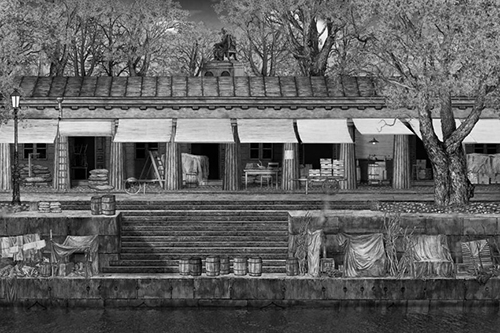 we are pleased to start our 2022 program with a cooperation: on the occasion of the exhibition Abgründe, die durch das Leben unter borealen Bedingungen verursacht werden (until January 28th, 2022) at the Kunstverein am Rosa-Luxemburg-Platz

Though their practice is essentially conceptual, IC-98 has been best known for animations, which combine classical drawing and digital effects, depicting landscapes shaped by long time durations, natural and human histories and climate. Mythical, material, factual and fictional elements are weaved together into visual stories, which though deeply political and meticulously researched, scripted and executed are presented as open-ended poetic narratives.

The mood of the works alternates between a sense of crisis, melancholy, acceptance and resigned optimism.

IC-98 (Patrik Söderlund and Visa Suonpää) will show: Realms, 2018, 19:38 min (dir. Patrik Söderlund) Realms is a voyage through time, evolution and the kingdoms of life towards the natural destruction wrought upon the planet by the human species. As Ovid writes in Metamorphoses, everything changes but nothing perishes. Things change shape, energy becomes matter and matter becomes energy. Realms is a film about this constant metamorphosis, a succession of states, epochs, species, kingdoms and realms, a journey through past and future strata, organic and inorganic phases and spheres of our planet. The story unfolds on a remote fishermans farm, where we begin our journey hundreds of millions of years ago in the depths of the primeval ocean.

We reach the shore, make our way through to the farm-yard, through the house to the garden in the rear and onwards to the nearby forest, followed by a swidden, a rocky ridge and the sand dunes beyond. Finally, millions of years into the future, we stand on the shore again, animate and inanimate nature levelled to black dust.

Grounded on the building blocks of life, carbon and water, we gaze towards the stars of the Milky Way. And so the cycle begins again. All that time, we have stayed within the perimeter of the farm and seen versions of how the same landscape has appeared at different times how it was before humans and how it will look after we are long gone. Though our own era is just a blink in the eye of the long continuum of epochs, this blind moment with its reliance on energy provided by fossil fuels and the wholesale exploitation of nature threatens the future of the entire planet.

A View from the Other Side, 2011, 70:00 min Already considered by many as a classic piece of contemporary Finnish art, A View from the Other Side shows Gylichs Doric colonnade in Turku, built in 1836, and its transformations across the centuries. Originally, stalls operated behind the columns selling produce caught by the local fishermen. Subsequently, the space has served, amongst other things, as a bazaar, a restaurant, a café, and a petrol station. In the early 2010s the city sold the property to private owners. The portico was modelled on the ancient Greek stoa, the only public building in the agora, which had no predefined use.

The stoa could thus be seen as a model for free civil society. The work is based on this interconnection between architecture and politics. The portico, the river, and the street between them, form a stage without dramatis personae. The idea was to create a play with time, weather and nature as its protagonists. In this narrative, in which multiple temporal rhythms are overlaid to form a seamless moving image, humans are only a fleeting presence even though humanitys imprint on the environment is constantly visible. The ceaseless flow of time is a central theme in the work, alongside the persistent presence of history. Here, the present and the future of the city are intertwined with the diverse ecologies of the built environment and nature. The conditions underlying public space are also revealed here as they relate to migration and homelessness. IC-98s work since 2010s addresses the environmental crisis and artistic-political methods of finding solutions to it.

The projects seek to replace anthropocentric worldview with modes better suited to take into consideration the interrelationships, dependencies and myriad temporal rhythms of all animate and inanimate nature.

With backgrounds in visual arts and cultural studies, IC-98s 24-year collaboration has produced artist publications, site and context specific projects and interventions, animated moving image installations, short films and various public commissions. IC-98 received the Finnish State Art Prize in 2009 and represented Finland at the Venice Biennale in 2015. Their work has been showed extensively at museums, biennials and festivals in Europe, Asia and the Americas. They often collaborate with scientists and other arts professionals.

The animations Nekropolis (2016), Epokhe (2017) and Lands of Treasure (2021), as well as the film Realms (2018), are allegorical descriptions of time, climate, and how environmental and cultural histories merge in different eras. On the other hand, the site-sensitive projects House of Khronos (2016-), Mare tranquillitatis (2020), IÄI (2020) and the ongoing Misi-Raaka Park of Wounded Earth (2019-) have instead of mere artistic depiction sought to create tools free zones, novel languages, new founding myths to help this community of all organisms emerge from the crisis.