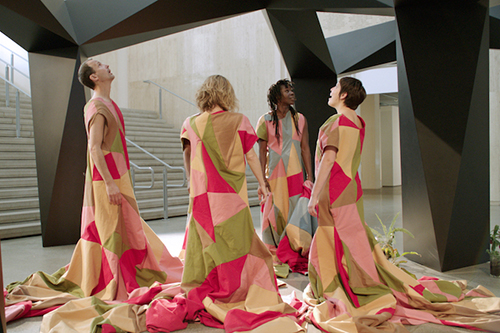 The Berlin based artist Brody Condon (b. Mexico 1974) facilitates and documents game-like group encounters that experientially probe the individual, material, and political ramifications of dissociative phenomena. The works are often made in collaboration with researchers, craftspeople, and public participants.

We look forward to Brody Conlon’s screening focusing on short edits of documentation from past durational sessions combining live action role playing (LARP) and group therapeutic techniques, with a personal introduction by the artist:

Future Gestalt (2012), 15:00 min
Experiential psychotherapy sessions set in the near future, facilitated by a sculptural entity embodied within the crystal inspired polygonal monument Smoke, by Tony Smith from 1967.

Zeigarnik Effect (2015), 15:00 min
An unscripted small group encounter led by a sentient sculptural entity, revolving around what the psychologist Bluma Zeigarnik described as intrusive thoughts about an objective that was once pursued and left incomplete.