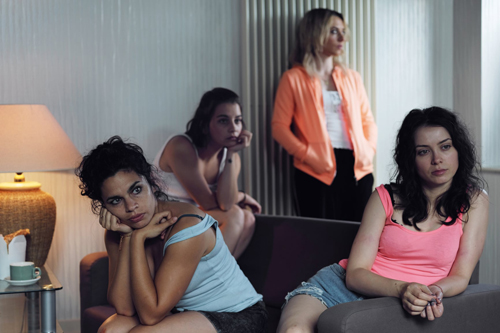 “Nobody knows where I am. Not even me.” Written by Gwyneth Hughes and directed by Lynsey Miller, Doing Money is a shocking true story about slavery in modern Britain. This fact-based one-off drama follows the heart-breaking and compelling story of Ana, a young Romanian woman snatched in broad daylight from a London street, trafficked to Ireland and used as a sex slave in a series of 'pop up’ brothels. Ana’s story offers a tense and thought-provoking thriller, with fascinating insights into the difficulties of policing a form of modern slavery that hides in plain sight. It exposes just how big business "doing money" is.

Gwyneth Hughes says: "I've been deeply affected by listening to Ana's unforgettable story. I've learned a lot from her - a lot I wish I didn't know - about the lives of women bought and sold into modern slavery. But I've also been moved by her courage, her humour, and her will to survive. She is a true heroine."

“The real Ana’s testimony in parliament in Belfast helped secure the passing of the Human Trafficking and Exploitation Act – the first new law against slavery in the UK for nearly 200 years.” (theguardian.com)

“’Doing Money’ – a slang term for prostitution – isn’t meant to be uplifting or hopeful. It’s supposed to be eye-opening, highlighting not only the grotesque perspectives of many countries’ laws on prostitution, but also on the grotesqueries of the industry, which has no shortage of clients and which realizes an extraordinary – and terribly disturbing – value on underage women.” (gonewiththetwins.com)

“Anca Dumitra in particular is a compelling screen presence, carrying much of the action along with a brilliant and astute central performance” (irishtimes.com)