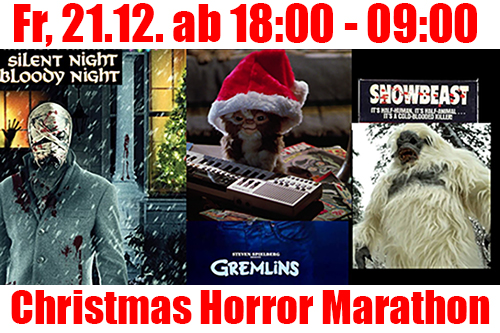 Have some time to KILL in Berlin before the holidays? Come to Babylon for 12 hours of hellish HOLIDAY HORROR!

Gremlins (Digitally Remastered, Special Edition) A boy accidentally breaks the three important rules for his new pet and unleashes a horde of evil monsters on a small town.

Silent Night, Bloody Night (WARNING: GRAPHIC VIOLENCE) An ax killer stalks a lawyer (Patrick O'Neal) and his girlfriend in a house that used to be an asylum.

Santa Claus Conquers the Martians (WARNING: SO BAD IT’S SCARY) Martians kidnap Santa Claus because there is nobody on Mars to give their children presents.

Snowbeast Guests at a ski resort must survive a man-beast's rampage.

The Snow Creature A scientist discovers the Abominable Snowman frozen in ice and ships him to Hollywood. -- PLUS -- Classic Christmas Horror Trailer Show! A Christmas Carol narrated by Vincent Price!