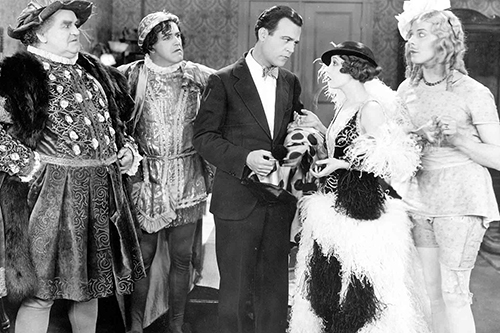 The Matinee Idol is a 1928 American silent comedy-drama film directed by Frank Capra, and starring Bessie Love and Johnnie Walker.

It was produced and distributed by Columbia Pictures.

The year 1928 was a decisive one for Frank Capra's career. Left without work following the failure of For the Love of Mike (1927)-a comedy starring a very young (and still unknown) Claudette Colbert, directed after the end of his partnership with Harry Langdon and now lost-the young filmmaker was in fact directed by his friend Max Sennett to Columbia, in search of new talent. As is well known, Frank Capra would work for Harry Cohn's studio until 1939, making his most famous films there and contributing decisively to the small studio's fortunes.

"Working nonstop, six weeks for each title (two to write the script, two to shoot, and two to edit), I made two more: So This Is Love, a comedy starring Buster Collier Jr., Johnnie Walker and Shirley Mason, and The Matinee Idol, a theater-tent comedy starring Johnnie Walker and Bessie Love. In them I tried to add to the comic elements another sure-fire ingredient: a bit of romance. It seemed to work."

"In The Matinee Idol Frank Capra abandons altogether the slapstick gags of Senettian and Chaplinesque derivation, still abundantly present in That Certain Thing and So This Is Love. Moreover, the plot, enriched by the meta-spectacular dimension (the play of theater within theater), becomes far more structured and complex, with symmetries and repetitions typical of sophisticated comedy (the Variety reviewer rightly observes that with a bigger budget the film would have been worthy of the most prestigious theaters). Above all, however, the comic element, in addition to being played in a far more skillful and refined manner, already appears to be counterbalanced by the pathetic component that we will find in almost all the comedies of the mature Capra, from Lady for a Day to It's a Wonderful Life.

It is no exaggeration to say that The Matinée Idol already contains in nuce some of the dominant themes in his more mature output, enumerated and discussed with precision by Michel Cieutat: for example, the opposition between province and metropolis (the naïve world of itinerant actors juxtaposed with the Broadway star system, the New York audience contrasted with the country spectators) and the complementary opposition between cynicism and candor (contrasting the New York impresario and-at least in the first part-the protagonist with Ginger and Jasper Bolivar); or the motif of conversion and the ultimate redemption of a guilty character, which recurs in the masterpieces of his maturity (e.g., in Mr. Deed Goes to Town, Mr. Smith Goes to Washington and Meet John Doe, where, however, the role of the naive man is played by the male protagonist, while it is the woman who after deceiving him repents). Is it too much to see in this film the first manifestation of Caprian comedy? In any case, it is surprising that after this happy result the director abandoned his elective genre to make a long series of (melo-) dramatic or action films (from the later The Way of the Strong to the first dramas with Barbara Stanwyck, passing through the adventurous trilogy of Submarine, Flight and Dirigible), returning to comedy only in 1931 with Platinum Blonde."