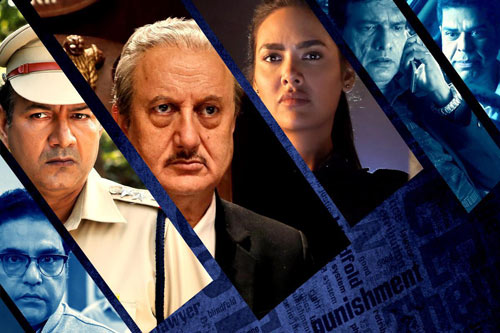 Justice Om Prakash Tyagi is well known for his fair judgement. He is also famous for his soft, polite nature. Inspite of this he knows that he has not delivered fair judgement for certain cases because of manipulation done with witness and documents presented in the court of law. Due to one of such cases he was even slapped outside the court by a Female. This incident stole the peace of his mind and sleep at night. Since then it is in his mind that one day he will bring them to justice by hook or crook even now after he retires. Inspector atya Narayan Sharma , Ranchi Police is a family friend of Justice Tyagi. He is known to be a lazy person, concentrates more on food and bribe than his work. He is aware of all the pain justice Tyagi has gone through. Police, Public and Media were shocked when a famous doctor couple and a Hotelier vanished overnight in the City. Inspector Sharma along with his senior gets the charge of the investigation but they could not get a breakthrough, not even a clue about the vanishing. It was election time. So Local MP started putting pressure on Police commissioner. Finally a crime branch special officer Laxmi Ratio was called into the case. Laxmi Rathi is know to be a intelligent Officer who has a record of solving critical cases easily with in short time frame. She along with Insp. Sharma as her associate start their investigations on missing persons case. Soon She findsout a common thread in all the cases. All the people kidnapped so far had their prvious criminal cases heard at Justice Tyagi's Court and were freed by Tyagi. She thinks that there may be a possible threat on Justice Tyagi also as he only had freed them from the cases. So she engages Insp. Sharma along with Justice Tyagi to tighten his security. But to her surprise another person gets kidnapped while she is on the case. Now this becomes the most challenging case to solve for Laxmi Rathi. One Day She gets a clue that all these people who got kidnapped were somehow connected to the MP. She puts a trap and asks Insp. Sharma to keep an eye on the MP when he is in town. On the action day she reaches a place following a trail...what she sees there leaves her in biggest shock and surprise of her life....