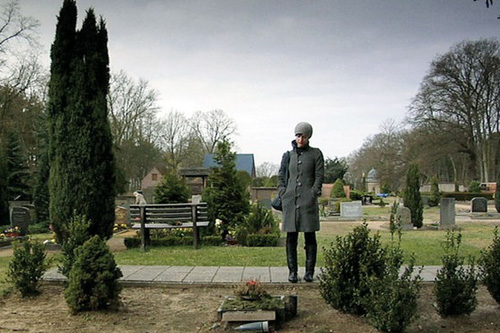 The epic documentary Farewell, Herr Schwarz depicts how family stories can be inherited like the color of the eyes, how a decision in 1945 can affect the lives of generations, and how two families become one again after decades. 1 failed meeting, 2 families, 3 generations. Following the screening, the Germany Israel Cultural Foundation e.V. kindly invites you to grab a snack and join the discussion with director Yael Reuveny. Please note, that the discussion will be in English.

The Germany Israel Cultural Foundation e.V. kindly invites you to join a screening and Couchgespräch with Yael Reuveny!

The series “Couchgespräche“ (“Couch Talks”) sets the stage for world-class artists who have made a name for themselves in the German-Israeli cultural landscape. In a moderated setting, they talk about their career paths, challenges and successes and share their reflections on art and society, leading a creative life in Israel and in Germany.

Meet: Yael Reuveny! Born and raised in Israel, Yael Reuveny started studying at the Sam Spiegel Film & Television School in Jerusalem in 2000, and completed her studies with the support of a grant from the America-Israel Cultural Foundation. Since her graduation in 2005, Yael has been living and working in Germany. In 2009, Yael completed “TALES OF THE DEFEATED”, a short documentary that had its international premiere at Visions du reel, Nyon, and won several awards, among them the first prize in the Jerusalem Film Festival and the Discovery award and DEFA Award at Cottbus Film Festival. Her first full-length documentary “FAREWELL, HERR SCHWARZ” (“Schnee Von Gestern”), premiered in late 2013 and has won several prizes, among them the award for outstanding German documentary in DokLeipzig and the Best documentary award in Haifa International Film Festival. The film was nominated for the Ofir - the Israeli Academy award - and won the Israeli Documentary Filmmakers Award. It was cinematically released in Israel in December 2013, in Germany in April 2014 in the United States in January 2015 and was very well received both by the critics and by the public. In parallel to her work as a documentarian, Yael is also the creator of museum video installations, among them “TUNICATA” (2017, Martin Gropius Bau Berlin) and “MESUBIN” (2019, a 21 screen installation, Jewish Museum Berlin, permanent exhibition).