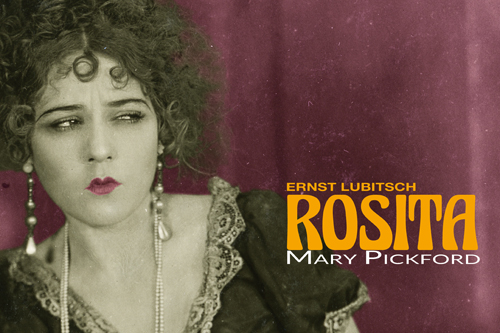 Restored by The Museum of Modern Art with support from the Louis B. Mayer Foundation, RT Features, The Film Foundation and the Celeste Bartos Fund for Film Preservation

Rosita is a costume romance set in a mythical Spain, where a lecherous King (Holbrook Blinn) has his eye on a popular but provocative street singer (Mary Pickford). She, in turn, yearns for the handsome young nobleman (George Walsh) who rescued her from the angry king’s guards—and has been condemned to a dungeon for his troubles. The Queen (Irene Rich) wisely bides her time, waiting for the right moment to intervene.

Following the American success of his German historical epics (Madame DuBarry, Anna Boleyn), Ernst Lubitsch was invited to Hollywood by Mary Pickford to direct her in what would become her first adult role. The result is this thoroughly enchanting blend of the “cast of thousands” period films that Lubitsch had been making in Germany and his emerging interest in bittersweet romantic comedy.

“It was a charming and wonderful experience. Miss Pickford was very sympathetic. In spite of her fame and predominant position, she followed my direction with the eager sympathy of a child. At the same time, her alert and intelligent mind worked like forked lightning. Miss Pickford is a very remarkable woman. She is not only of the highest personal character, but she is an artiste of real genius. It was a pleasure to work with her.” – Ernst Lubitsch, “My Two Years in America,” in Motion Picture Magazine, 1925.

The film was, by all accounts, a major critical and commercial success on its first release, but in later years Pickford turned against it, for reasons that still remain mysterious, and decided to allow the film to decay (she did, however, preserve reel four, for reasons no less mysterious). Rosita vanished from circulation until a nitrate print was discovered in the Russian archives and repatriated by The Museum of Modern Art in the 1960s. A safety preservation negative was made from the nitrate print, but no further work was done on the film, until recent breakthroughs in digital restoration made it possible to reclaim much of the severely damaged image. Because the original English-language intertitles do not survive, it was necessary to recreate them on the basis of an early draft screenplay in the collection of the Academy of Motion Picture Arts and Sciences, the Russian intertitles, the Swedish and German censorship records, a handful of lines quoted in contemporary reviews, and a music cue sheet from the collection of the George Eastman Museum. Using the titles in Pickford’s preserved fourth reel as a template, new intertitles have been created to match the original graphics as closely as possible.

Musicologist Gillian Anderson has reconstructed and arranged the original 1923 score, which will be performed live for this premiere presentation by the Cinemusica Viva ensemble under Ms. Anderson’s direction.