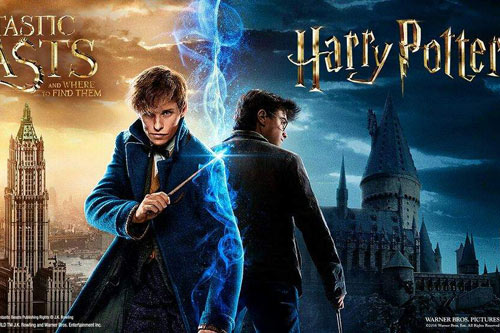 David DMP Moore and Babylon invite you to board the Hogwarts Express AGAIN and take an incredible journey through the entire magical world of Harry Potter! This is the ULTIMATE Harry Potter experience in Berlin: THE ENTIRE FILM SERIES (in original English language), including the FANTASTIC BEAST FILMS, in ONE 24 hour back-to-back marathon!

Fantastic Beasts and Where to Find Them (2016)
The adventures of writer Newt Scamander in New York's secret community of witches and wizards seventy years before Harry Potter reads his book in school.

Fantastic Beasts: The Crimes of Grindelwald (2018)
The second installment of the "Fantastic Beasts" series featuring the adventures of Magizoologist Newt Scamander.

Harry Potter and the Sorcerer's Stone (2001)
An orphaned boy enrolls in a school of wizardry, where he learns the truth about himself, his family and the terrible evil that haunts the magical world.

Harry Potter and the Chamber of Secrets (2002)
An ancient prophecy seems to be coming true when a mysterious presence begins stalking the corridors of a school of magic and leaving its victims paralyzed.

Harry Potter and the Prisoner of Azkaban (2004)
It's Harry's third year at Hogwarts; not only does he have a new "Defense Against the Dark Arts" teacher, but there is also trouble brewing. Convicted murderer Sirius Black has escaped the Wizards' Prison and is coming after Harry.

Harry Potter and the Goblet of Fire (2005)
A young wizard finds himself competing in a hazardous tournament between rival schools of magic, but he is distracted by recurring nightmares.

Harry Potter and the Order of the Phoenix (2007)
With their warning about Lord Voldemort's return scoffed at, Harry and Dumbledore are targeted by the Wizard authorities as an authoritarian bureaucrat slowly seizes power at Hogwarts.

Harry Potter and the Deathly Hallows: Part 2 (2011)
Harry, Ron, and Hermione search for Voldemort's remaining Horcruxes in their effort to destroy the Dark Lord as the final battle rages on at Hogwarts.
Pillows, blankets, sleeping bags, and anything else to make you more comfortable in the kino is welcome!