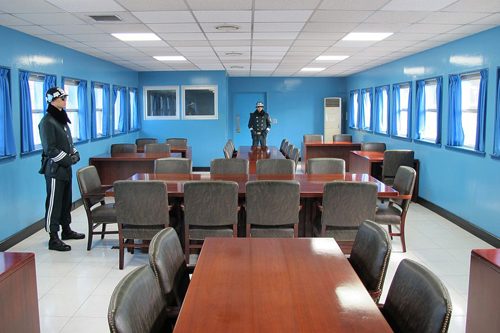 Andy and his mother tries to flee from North Korea, but the escape plan goes desperately wrong. After crossing the border safely, their guide does not show up as agreed, and they are stuck in the hillsides in China in minus thirty degrees weather. After three days without food or water, they are suffering from severe frostbite and almost freezing to death. Knowing the high risk of being discovered by Chinese border police and returned to brutal punishment in North Korea, they get onto a local bus and decide to venture into China on their own. On their way, they get unexpected help from a secret network of people, mostly Christians, called the Underground Railroad. Risking their own lives, these people provide logistical support to help bring North Korean defectors to safety. In this documentary we follow the stories of refugees from North Korean as well as the recognized human rights activist Tim Peters - who for two decades has worked to save as many North Korean escapees as possible through the Underground Railroad.

"5096" is a story about the dehumanization of refugees living in France, in “the camp of shame.” It is about women and children who are victimized, abandoned and wounded by routine political injustices. It is a story about a struggle for human rights and identity. Through the eyes of Babak, an Iranian refugee who escaped the political unrest of his homeland and lived in the Calais Jungle, “5096” reveals the truths about the psychological and physical battles of life as he poignantly depicts the tragic conditions of migrants’ lives.

A portrait of a young Iraqi who left everything behind at 15, in a solo quest for a more peaceable future; Hameed’s salvation is education in the US bound by a big altruistic dream. A modern hero’s journey; a child of war runs the race of his life, for days cross-country, and knocks on the door of refuge. Supplicating for entrance, and turned-away twice in Turkey, finally, Hameed is granted United Nations-guaranteed safe passage, to the USA — a solo journey, leaving his home for refuge, hope and dreams. He lands in Seattle where, after 8 years of no education in Iraq, he gains speed with access to resources and the classroom. It seems insurmountable, he’s dedicated and learns a third language, he encounters adversity and challenge, a foster family steps forward, and he accelerates towards higher education and loftier altruistic dreams... This being survival. This being resilience. This being immigrant. This being free. This being our American Dream. THIS BEING HUMAN

This Being Human | إنسانية | Trailer from Aimie Vallat on Vimeo.