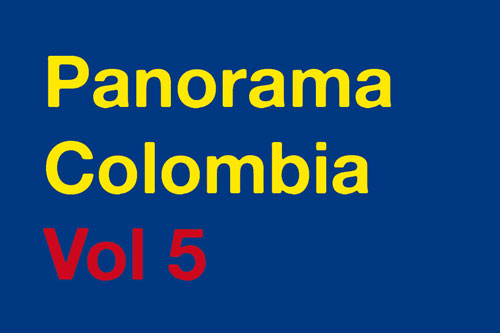 This year, in addition to the video art program, Panorama Colombia has made a special invitation to the Decolonial Museum, a project of the artist Julián Santana. Decolonial Museum was an audiovisual intervention project in the collection of the Colonial Museum in Bogotá between October 2018 and January 2019. Santana carried out a research process in which, in addition to touring museums and heritage assets such as the Pre-Hispanic Latin American Collection from the Ethnological Museum of Berlin, Germany; the Gold Museum (Museo del Oro), in Bogotá, Colombia; the House of America (Casa de América), in Madrid, Spain; The General Archive of the Indies (Archivo General de Indias) and the Colombia Pavilion (Pabellón de Colombia), in Sevilla, Spain. He also compiled a series of vital audiovisual testimonies, immaterial references with which he built the series of audiovisual interventions that he placed in the rooms of the Colonial Museum of Bogotá, that now can also be appreciated in the framework of Panorama Colombia. From a decolonial perspective, the audiovisuals of this exhibition are added to the series of critical reflections that, on the belonging of the heritage and the colonial legacies, nowadays arise around the adaptation of the Humboldt Forum and the reconstruction of the Berliner Stadtschloss in Berlin. The Decolonial Museum would not have been possible without the collaboration of: Aminta Yara, Marcos Yule (ACIN), Alberto Quiroga; Daniel Ramírez and Claudia Supelano-Gross (University of Tolima); Lucía Madriñán Saa (consul of Colombia in Seville); Manuela Fisher (Ethnological Museum of Berlin); Manuel Amaya Quintero and Maria Constanza Toquica (Colonial Museum of Bogotá).
Length of the program: 45 min.

Videoart KURATOR REX PRESENTS De-colombianity Now! Videocañonazos del Post-conflicto. Vol 3. Colombian videoart on Post-conflict & Utopia. Panorama Colombia, the Colombian Film Festival of Berlin, in its fifth version, is pleased to announce its official video art program that will include the participation of: Edinson Quiñones, Alexander Rios, Carol Sabbadini, Santiago Camargo, Miguel Ángel Rojas, Esteban Rivera, Mario Opazo, Fernando Arias, Ricardo Moreno, Carlos Motta, Clemencia Echeverri, Tatyana Zambrano, Diego Aguilar, Sandra Regifo. “The savages that inhabit it would be civilized, and our possessions would be increased in the acquisition of the Goajira [territory]. This nation would be called Colombia, as a tribute of justice and gratitude to the breeder of our hemisphere.” Simón Bolivar The Jamaica Letter, September 6, 1815. We come from the times of the 'post-' prefix, where the need and expectation to travel towards future realities, hopefully better, has become evident. Great "discoveries" of the western world have become evident here: through post-truth, cynicism was rediscovered; through post-conflicts, the disillusionment we manifested towards utopias was rediscovered (like the long-awaited and elusive "stable and lasting peace" that is claimed to exist today in Colombia); through postmodernity, on the globalized scale of Western ideological structures, failure was rediscovered and through post-colonialism, we deeply hope that shame has been rediscovered in the face of an abysmal colonial legacy. The brief quote of Bolivar transcribed at the beginning of this text is sufficiently extensive to clearly show part of the colonial matrix of powers with which our independent nation, Colombia, was conceived and constituted. Hierarchies of domination in class, race and economy tell how ideological structures are exclusionary, naturalized and easy to identify. The opposition of the savage to the civilized will continue to account among other things, why the fellow rural and peripheral, as well as their struggles and leaders, are always identified in a condition of tacit inferiority against the interests of the one who is urban, central and enlightened. This is an important value when qualifying contemporary political initiatives such as wanting to separate the territory of Cauca in two, one for mestizos and another for aboriginals , in a region that has the most extensive list of murdered social leaders of the recent Colombian ‘post-conflict'. In the national identity, the legacy which we must fight against remains, this 'tribute of justice and gratitude to the breeder of our hemisphere', converts our nation in the paradigm of the colonial nature of being, of knowledge and power. In this homage to Christophorus Columbus, Colombia carries in its implicit name the categorical denial of all those excluded from the national memory. Colombia was once Ecuador, Nueva Granada (now Colombia) and Venezuela united, of course, the expanded dream of Bolivar may had been that the Abya Yala, or the entire America, were also a united Colombia. For those who might prefer the prefix 'de', from the “Decolonial option”, perhaps an alternative to follow an independence project like the one of 'Colombia', would be precisely to de-colombianize its identity, in the midst of an analytical and practical effort for de-linking and confronting these colonial matrices of power in religion, state and society. That is, to reverse the homage or at least to question those ideological structures that make it possible in the collective unconscious. This is the intention, not unique, but shared, of the selected audiovisual projects that are part of this exhibition.
By Julián Santana.

VIDEOCRATICA - Audiovisual Research and Creation Residencies Program. This year KURATOR REX, Official Video Art Program Panorama Colombia, will host some of the projects Videocrática, residence audiovisual creation initiative in Colombia El Kruce projects in partnership with Kunstrial e.V. in Germany. In this second year of the exchange program for artistic residencies between Colombia and Germany, Videocrática will receive in Berlin between March 14 and April 14 the Colombian artists: Sandra Rengifo, Alexander Ríos, and -La Radio Criolla- as a guest project to the sound creation residence.